We’re pleased to present Driver Fusion 5.0! It’s been a while, but we’ve been working hard on bringing you this update. Our mission was to improve the performance, stability, usability and the offered features. You can read the highlights of these improvements below. We hope you like this version as much as we do!

We’ve been focusing our efforts on improving the interface and it’s usability and have redesigned almost everything. It’s still familiar to previous versions, so you won’t have to learn from scratch. An important highlight, by popular request, is that you can now search, filter and sort through content, almost everywhere! But that’s not all, it’s also possible to use Driver Fusion 5.0 with just your keyboard. We’ve added focus hints to all controls to make it easy to see where the current focus is. You’ll see how nifty all these changes are once you start using them.

Up until now, there were two categories for downloading drivers; missing drivers and outdated drivers. As they did almost the same work, they have been combined into driver update. If you’re checking for driver updates, clarity is essential. We’ve been receiving a lot of feedback on why Driver Fusion is recommending certain drivers. Whenever a recommended driver is not undeniably clear, it will now add an explanation. Still having doubts? Feel free to contact us and we’ll help you out. At times you want to take a closer look at a device or its driver. You can now go directly to the device or its driver in device control. Another frequently requested feature we’ve added is that each recommended issue can now be fixed on its own. Don’t worry, you can still fix all issues at once.

Starting with Windows Vista, there’s additional information available about a device or a driver. This information was already used throughout Driver Fusion and has now been added to device control. All available information – including the identifier – is now accessible immediately after selecting a device. Driver Fusion 5.0 also ships with several other important improvements to device control. If you want to install a driver it now includes compatible drivers from Windows’ driver store. For experts, we’ve also added the ability to uninstall a driver from Windows’ driver store. The driver signature verification is also significantly improved, both the results and the performance (on average a driver is now verified twice as fast).

If you want to monitor your devices, Driver Fusion has always given you a variety of options to do so. The current sensor values are great for getting insight into your devices, but sometimes you want to visualize past performance as well. In Driver Fusion 5.0, we’ve added a graph – for each device – for the available sensor values. It’s super flexible, and will allow you to add just the sensors you want to display. We’ve also added additional information about each device, such as the socket of your processor, the BIOS version of your motherboard, and the reallocated sector count of your hard disks.

Need to clean up old drivers or install a new driver? All drivers received new entries to be up-to-date with their latest versions. We’ve also added support to clean the device itself and entries from the task scheduler and Windows’ driver store. Several new drivers have also been added, including NVIDIA’s GeForce Experience software. In Driver Fusion 5.0 we separated entries that are shared between certain drivers. While cleaning those drivers – such as NVIDIA’s display driver and NVIDIA’s GeForce Experience – you can now decide whether you want to include their shared entries. We’ve also added a hint when drivers are combined by the manufacturer to support multiple devices, such as Logitech’s keyboard and mouse drivers.

Sometimes you want to view or restore an operation you’ve performed in Driver Fusion. Our goal for Driver Fusion 5.0 was to create an easy to use – and complete – history of almost anything you can do. Whether you clean a driver or disable a device, you don’t have to worry anymore about the outcome as you can always undo the operation. In most cases, you want to restore the entire operation. Operations that are merely collection of other operations, such cleaning a driver, can also be restored separately. We’ve also visualized if the operations you performed succeeded.

In driver cleaner: some installers cannot be restored because they are missing on your computer. This is not a limitation of Driver Fusion but due to how Windows or these installers are set-up. You can manually download the installer again.

It’s good to have choices, like the ability to change the default preferences of Driver Fusion. In Driver Fusion 5.0 we’ve changed a few default preferences to their expected value. We’ve also combined several settings and – where applicable – extended their functionality throughout the entire application. A diagnostics report for troubleshooting can now be created from the general settings.

To benefit from Windows’ file protection, Driver Fusion will now store its data in different folders. Data that can be shared among all users, such as driver backups, is written to the ProgramData folder. User-specific data, such as your settings, is written to the local AppData folder. This change also enables you to use Driver Fusion in multi-user environments without having to share your settings with everyone. If you want to override this behavior and have Driver Fusion store its data in the installation folder, you have to start Driver Fusion using the --p argument. This does not apply to the Steam edition, data will continue to be stored in the steamapps\common folder in order to utilize Steam Cloud.

You play an important role in making Driver Fusion better. We welcome your feedback on this version, as well as any ideas you might have. Please contact us on our website.

We are pleased to announce that Driver Fusion 3.3 can now be downloaded. In this update we focused on improving the usability and performance of health check. More information can be found below.

One of the most frequently heard complaints about Microsoft's Windows 10 is the forced download and installation of driver updates through Windows Update. In previous versions of Windows you were presented with a list of (driver) updates and could uncheck an update if you wanted to. While this change might seem useful for users that never update their drivers, there are several reasons why you do not want Microsoft to control the drivers that are installed on your computer, such as:

Because all driver updates are enforced by Microsoft, you cannot roll back to a previous version as Windows Update will download and install the driver again.

With Driver Fusion you can disable automatic and mandatory driver updates in Windows 10, but this feature also works for Windows Vista, 7, 8 and 8.1. Once you have opened Driver Fusion, go to the settings 1 and select the advanced settings 2. You can then change how Windows driver updates are installed by changing the setting in 3 to Never install driver software from Windows Update. After you have changed this setting you will have to restart your computer for the changes to take effect. 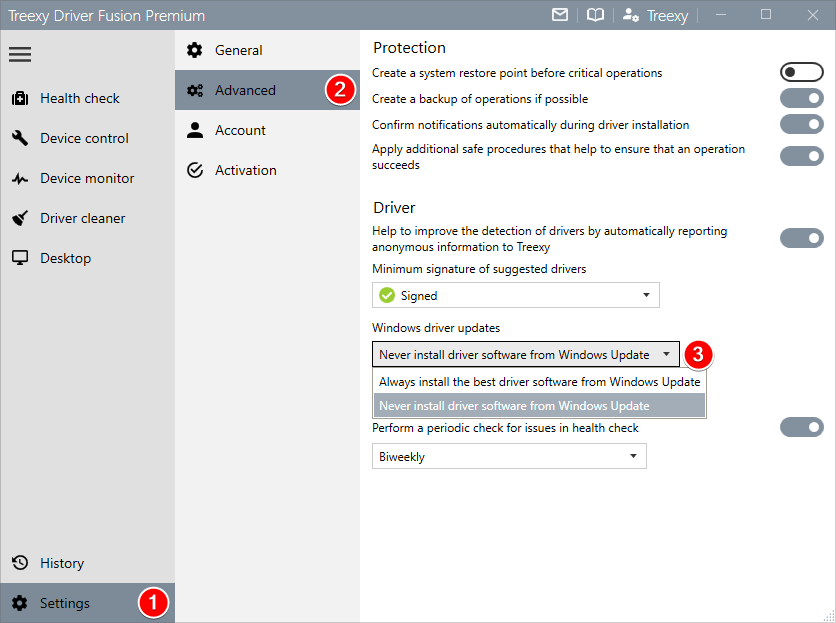 Unfortunately, most driver updates that are already discovered by Windows Update can still be installed after you've made this change. This does not happen on every computer and you only need to continue with this guide when a driver is still being installed without your consent. In order to prevent such drivers from being installed you can download the Show or hide updates troubleshooter package from Microsoft.

Using the show or hide updates troubleshooter from Microsoft.

Once you have opened the troubleshooter, select Advanced 1, make sure Apply repairs automatically is checked 2 and select Next. The next screen will ask you if you want to Hide updates or Show hidden updates. You should select the Hide updates 3, unless you want to undo an update that you have hidden. The troubleshooter will now scan your computer for available updates and show you a list of updates that can be hidden  4. Make sure that you only select driver updates and ignore all regular Windows updates. Even though the troubleshooter can hide these updates as well, we do not recommend this as regular updates often contain software and security fixes. Once you have selected the driver updates that you want to hide, click on Next and then Close. Even though it is not necessary for most computers, we recommend you to restart your computer.

In all cases: driver updates that are added to Windows Update will be automatically hidden through the change you made in Driver Fusion.
You can use Driver Fusion Premium to automatically update the drivers you want, we always give you full control.

Today, we are happy to announce that Driver Fusion 3.2 is now available for download. This release marks the beginning of improving driver family. More information can be found below.

We are thrilled to announce Driver Fusion 3.1, which can be downloaded right now. This update comes with full support for the recently released Windows 10. More information can be found below.

We are delighted to announce that Driver Fusion 3.0 is available for download now. The most important change of this update is a redesigned menu based on the feedback we received. More information can be found below.

Since last year we've been working a lot on improving the interface of Driver Fusion. Many parts of the interface, including the redesigned menu added in this update, are improved based on the suggestions we receive. Please continue to share your thoughts with us as this is important for us and the future of Driver Fusion. As with all updates, it's free for everyone to enjoy.

We are pleased to announce Driver Fusion 2.9, which is now available for download. In this update we have resolved several issues with the help from our amazing community. You can find a detailed list of the changes below.

Thank you all for your continued support!
For all Driver Fusion Premium users, your installation will update automatically.

We're very excited to announce the release of Driver Fusion 2.8, now available for download. This releases introduces many community suggested features, along with several other changes that you will find below.

Anything else you would like to see added or improved? Let us know!
For all Driver Fusion Premium users, your installation will update automatically.

Driver Fusion 2.7 has been released and is available for download. This release focuses on the new online service. Below you will find information regarding the old online service and the other changes.

Everyone at Treexy would like to wish you a Merry Christmas and a Happy New Year. As this year is ending, we would also like to thank you for your continued support. We will be back with more releases and news on our latest projects in 2015.

Driver Fusion 2.6 has been released and is available for download. This release focuses on improving the user experience. Below you will find the release notes containing all the changes.